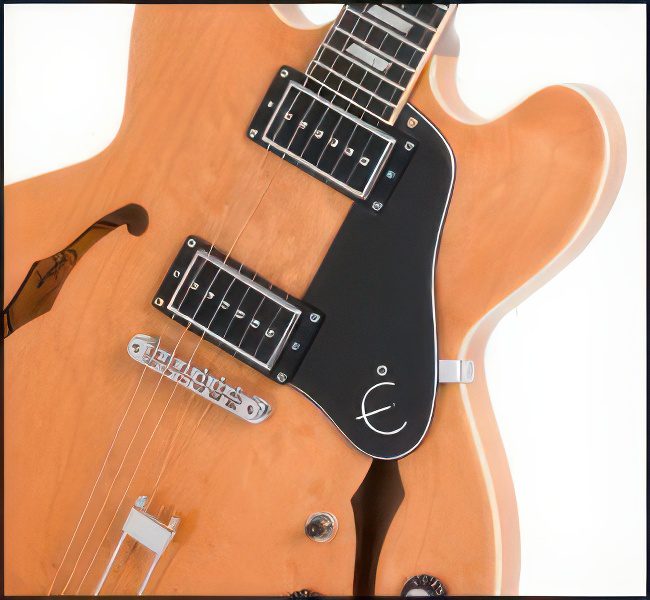 When you’re the lead guitarist in New York’s coolest rock band, you need a guitar to match. As such, it stands to reason that when The Strokes started out in Manhattan in 1999, Nick Valensi chose to play his incendiary guitar riffs on a customised Epiphone Riviera. From the fuzzy stomp of Last Nite to the brittle groove of Juicebox, the Riviera is at the heart of all the band’s greatest moments. And from the start of 2007, when the new Epiphone Nick Valensi Riviera P94 makes its debut at the Winter NAMM show in Anaheim, it could be at the heart of all of yours.
Valensi has previously collaborated with Epiphone to create a signature Riviera as part of the Elitist Series. Now, the coolest signature model in the world has just got even more affordable with the launch of the Nick Valensi Riviera P94. True to the Riviera’s roots, this is a stunning semi-hollow design that combines a lightweight mass with a heavyweight performance. Laminate maple is used for the body and top, with a slim mahogany neck and a fast-flowing fretboard allowing the kind of finger acrobatics that lit up tracks like The Modern Age.

A tune-o-matic bridge and trapeze tailpiece combine style with security, while professional Grover tuners ensure that everything stays at the right pitch. As a package, it’s enough to make anyone lose their cool.
But it’s not until you fire the Nick Valensi Riviera P94 through an amp that you realise how hot this guitar really is. With a Gibson P-94T pickup at the bridge and a P-94R at the neck, the high-output yet responsive tones of this model have your back covered whether you’re rocking out or sitting back.
The new Epiphone Nick Valensi Riviera P94 Electric Guitar makes its debut at the 2007 Winter NAMM show in Anaheim. Get in the queue.